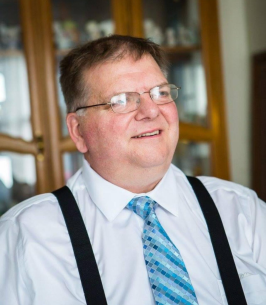 Born March 30, 1961, in San Angelo, Texas he Is the son of Sandra Charles Stout of Battle Creek, Michigan and the late James Stout.

He received Jesus as his personal Lord and Savior July 14, 1978, and served Him faithfully until he was called home to glory. Living in the area for the past 22 years he became the pastor at the Heritage Baptist Church in Groton in 2000. He will be remembered for his compassion and his teachings in the church as well as his vacation Bible school character of Dr. Kalvin. He was an avid sports follower especially of college football, particularly Michigan Wolverines, the Raiders, the Cubs and SU basketball. He enjoyed umpiring, amusement parks and was a Star Trek fan.

A Celebration of his life will be held on Wednesday, December 21, 2022 at the Heritage Baptist Church (108 Elm St. Groton NY) at noon. The family will receive friends from 10 to noon prior to the service. Spring Internment will take place at the Groton Rural Cemetery.

Memorial contributions may be made to the Heritage Baptist Church mission fund.