To share your memory on the wall of Norman Benson, sign in using one of the following options:

A dairy farmer most of his life, he took over the family farm from his father. His son, Douglas Benson, now lives on the family farm. Through Benstead Farm Equipment, Norm installed and sold Patz barn cleaners, silo unloaders and feeding system from 1966 until 1991 when his son Douglas took over the dealership. He was a life-long member of the West Groton Bible Church.

Norm and Earlene loved to travel. The couple traveled the United States with their young children to all the states west of the Mississippi, visiting national parks and other sites. The family traveled to two World’s Fairs (Seattle and New York.) Norm and Earlene also traveled to Hawaii through the Patz dealership. Additionally, they spent a year in England and traveled Europe while Earlene was on sabbatical leave from Lansing Central School. From 1991 to 2011, they were missionaries in Puerto Rico for six to eight months of the year. For the first ten years, they provided room and board for sailors at Roosevelt Roads Naval Base at the Safe Harbor Mission. Then another ten years, they served at the Evangelical School for the Deaf in Luquillo, PR, where Earlene taught English using sign language and Norm took care of the grounds and buildings. In their 90s Norm kept busy cutting wood and Earlene self-published a book, A Journey of a Different World, which was her family history from 1922 through meeting Norm in 1947. For their 50th wedding anniversary, Norm and Earlene traveled through Canada on the Rocky Mountaineer Rail Tours and on their 60th cruised the Panama Canal.

Calling hours will be at the West Groton Bible Church at 854 Cobb Street, Groton, New York, from 4:00 to7:00 pm on Thursday, July 1. The funeral will also be held at the church on Friday, July 2 at 10:00 am followed by a burial and committal service at the West Groton Rural Cemetery on Durfee Road, Groton, NY

In lieu of flowers, donations can be made to Hospicare.

We encourage you to share your most beloved memories of Norman here, so that the family and other loved ones can always see it. You can upload cherished photographs, or share your favorite stories, and can even comment on those shared by others.

Posted Jul 02, 2021 at 07:32am
My sincere condolences to the Benson family. I remember Norm well, especially at Benson reunion times, even though I was younger than he. I am related to the family through the /Benson/Haring line. DeeAnn Weibly Daniels.
Comment Share
Share via: 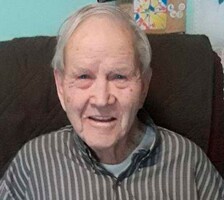