To share your memory on the wall of Loraine Wood, sign in using one of the following options:

Print
Loraine June Wood 88, of Freeville passed away on Monday, January 25, 2021 at the Guthrie Cortland Medical Center after a short illness.

She was born December 17, 1932 in the Town of Caroline, a daughter of the late Charles and Mary Cri... Read More
Loraine June Wood 88, of Freeville passed away on Monday, January 25, 2021 at the Guthrie Cortland Medical Center after a short illness.

She was born December 17, 1932 in the Town of Caroline, a daughter of the late Charles and Mary Crispell Pierce.

A resident of Locke and Freeville for all of her life, she was the widow of the late Donald Lewis Wood, Sr. who died June 1, 1989. A loving mother, grandmother and great grandmother, she was a homemaker, a role she enjoyed and was an accomplished seamstress, taking in outside work to help raise her family. In her spare time she enjoyed to not only sew, but crochet, read and work with coloring books.

She is survived by her children, Patricia (Douglas) Kannus of Lansing, Donald Lewis Wood, Jr. of Auburn, Steven (Amy) Fay Wood and James (Jane) Lee Wood, all of Freeville; her siblings, Dennis Ryan, Jr. of Groton, Gordon (Jane) Ryan of Ithaca, Beverly Baker of Skaneatles and Peggy Houghton of Trumansburg; 11 grandchildren, 20 great-grandchildren and many nieces, nephews and friends.

In addition to her husband, mother and father, she was pre-deceased by her step-father, Dennis Ryan, Sr., a daughter, Katherine Wood and a brother, Arthur Pierce.

Funeral services for family and friends will be held on Saturday, January 30, 2021, 11:00 a.m.at the Groton Assembly of God Church. Spring interment will be in Groton Rural Cemetery. There are no calling hours.

We encourage you to share your most beloved memories of Loraine here, so that the family and other loved ones can always see it. You can upload cherished photographs, or share your favorite stories, and can even comment on those shared by others.

Posted Jan 28, 2021 at 12:39pm
My condolences to the Wood family. I was one of the nurses that overlooked her care since this past August. She was a kind, loving woman and very patient to us Healthcare workers! I will deeply miss her morning smile when coming into her room at 7 am meds pass. God Bless you Lorraine, and R.I.P my friend.
Comment Share
Share via:

Posted Jan 28, 2021 at 08:50am
Steve and Amy, I am so sorry for your loss. Happy memories will help get you thru this. May God bless and give you peace at this time.
Susan and David Brogan
Comment Share
Share via:
JR

Posted Jan 27, 2021 at 09:39pm
My Aunt Sis (as we knew her) knew her way around the kitchen. As her nephew, and a young boy, I have vivid memories of being in my grandmothers kitchen for the cooking that led up to our families thanksgiving and Christmas meals. She was always in the middle of it all. She was definitely a part of my own inspiration to make my own food from scratch. 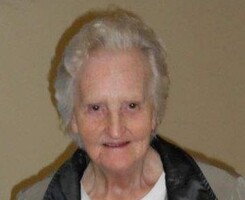