To share your memory on the wall of Susan Zelenak, sign in using one of the following options:

Born September 20, 1939 in Dearborn, Michigan, she was a daughter of the late Sahag and Ramela Derkavorkian Rapaelian.

Born September 20, 1939 in Dearborn, Michigan, she was a daughter of the late Sahag and Ramela Derkavorkian Rapaelian.

A resident of the Ithaca area since 1998, she was employed with Cornell University Dining Services for ten years.

Susan was an avid reader and greatly enjoyed books on tape.

She was pre-deceased by a brother, Jack Rapaelian.

At this time there are no public services scheduled.
Read Less

We encourage you to share your most beloved memories of Susan here, so that the family and other loved ones can always see it. You can upload cherished photographs, or share your favorite stories, and can even comment on those shared by others.

Plant a Tree in Memory of Susan
Plant a tree 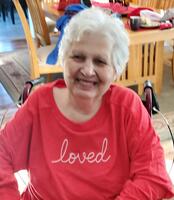